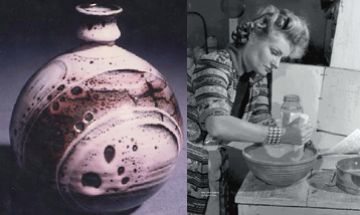 The Marin Museum of Contemporary Art at Hamilton Field in Novato will present MARY TUTHILL LINDHEIM: AGENT OF CHANGE, featuring the work of the late Bay Area ceramicist, sculptor, and activist, Mary Lindheim (1912-2004). It will be the first museum exhibition of Lindheim’s work since her death, and the most comprehensive solo show ever of her work.

MarinMOCA Executive Director, Heather Murray, will curate the exhibition in close collaboration with the artist’s estate and Abby Wasserman, editor and essayist of the recently published Mary Tuthill Lindheim: Art and Inspiration (Cameron and Company, 2010). The exhibition honors Lindheim, who lived in Sausalito and Bolinas for the last 65 years of her life, not only as an artist but as someone passionately dedicated to social justice.

MARY TUTHILL LINDHEIM: AGENT OF CHANGE encourages the viewer to consider the historical and material importance of an artist who created with a true awareness of the impact an artist can make in and out of the formal art world. Although visitors to the exhibition will likely associate the title with Lindheim’s socio-political activism, the phrase "agent of change" also refers to the physical transformations an artist makes to her/his medium. This is particularly true in the case of a ceramic artist, who transforms earth into art and must understand and employ the chemical transformations of ceramic glazes under the heat of the kiln.

Mary Tuthill Lindheim, a native of New Jersey who spent her youth in Tucson, Arizona, was especially prominent in the 1940s, 1950s and 1960s, years during which she worked tirelessly on behalf of Bay Area art organizations to which she belonged. An exhibiting sculptor when she began her ceramics studies in 1946, she received a scholarship for advanced research in ceramics in her second semester at the California College of Arts and Crafts. Five years later, she was elected president of the Association of San Francisco Potters. She was concurrently an active leader in the older organization San Francisco Women Artists. Sometimes her dual involvement in art and activism dovetailed, but sometimes they were at odds, challenging her ability to actively promote her own career. She would have it no other way.

A passionate advocate for studio craft (which at the time was not considered a "fine art"), Lindheim contributed to the public discourse about ceramics by publishing in Craft Horizons and Ceramics Monthly. In 1958 she was one of the founding members of Designer-Craftsmen of California, and in 1966 she began years of volunteer work organizing and improving the Sausalito Art Festival. She served many times as juror for exhibitions in Marin and San Francisco as well as out of state, and taught ceramics and arts and crafts classes at the California Labor School and the California School of Fine Arts (now San Francisco Art Institute), among others. Throughout her career she traveled and exhibited extensively, but kept her roots in the Bay Area. Her work is now in the John Magnani Memorial Collection at San Francisco State College, the Bolinas Museum, Crocker Art Museum, Oakland Museum of California, Arizona State University, and Mills College, among others.

There will be a lecture by curator Heather Murray and a book signing by Abby Wasserman on Saturday, December 10, 4-5pm.

MARY TUTHILL LINHDEIM: AGENT OF CHANGE is made possible in part by the generous lending of works and support of her estate, as well as lending of work by Bolinas Museum and the Crocker Art Museum. Additional support provided by the Clay and Glass Artists of California. 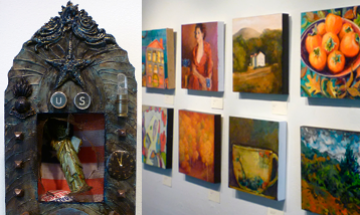 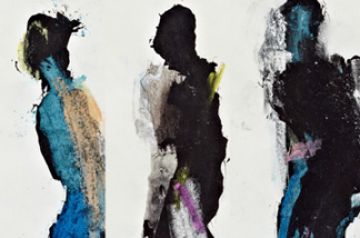 LEGENDS OF THE BAY AREA is an annual exhibition honoring artists whose contributions helped define Bay Area artistic style. The 2011 exhibition featured a unique selection of artworks by Manuel Neri. The artworks, created in the 1970s and 1980s, were inspired by Japanese figures and landscapes, and range from 2D mixed media drawings to 3D bronze busts and maquettes. Neri maintains his signature style and subject matter in these works, with urgent brushstrokes, gracefully calligraphic female figures, the introduction of bold colors, and the compelling tension between elegant classicism and the energetic record of the artist's hand. This group of artworks is unique, however, in the inclusion of unpopulated landscapes, the use of mixed media on appropriated printed materials, and the clear reference to Japanese culture, resisting Neri's attempts to universalize the female form. These artworks are decidedly Neri in many ways, but they are also a Neri moving toward the specific.

Manuel Neri is well known as one of the driving forces behind the second wave of the Bay Area Figurative movement, employing the female figure as his primary subject against the current of Abstract Expressionism in the 1950s and 1960s, and developing his particular approach to figurative sculpture in the 1960s. He entered the military in 1953, greatly influenced by the time he spent in Korea and Japan. Born in Sanger, California, Neri attended San Francisco City College, the University of California, Berkeley, the California College of Arts and Crafts, and the California School of Fine Arts, working later as an instructor at the California School of Fine Arts, UC Berkeley, and UC, Davis. His work has been shown throughout the United States and in Europe, and he has received numerous grants and awards, including an Individual Artist Grant from the National Endowment for the Arts, an Honorary Doctorate for Outstanding Achievement in Sculpture from the San Francisco Art Institute, and a Lifetime Achievement Award in Contemporary Sculpture from the International Sculpture Center. 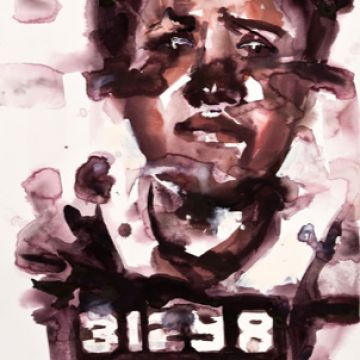 SHATTERED, MarinMOCA's 6th annual Fall National Exhibition, was juried by Kenneth Baker, Art Critic for the San Francisco Chronicle. Baker selected 48 artworks from hundreds of entries to design an exhibition that pushes the range of the theme's meanings. The theme's reference to disruption, change, destruction, and splintering gave artists the opportunity to explore the positive and negative connotations of such actions. Panta Rei, a painting by San Jose resident Emanuela Harris-Sintamarian, contemplates the ways that shattering can be productive through the combination of colorful, dynamic shapes that indicate, as its title suggests, everything is in motion. Constant movement and change in the world means that no one thing can be experienced in precisely the same way by different people. Monica Lundy of Oakland explains that her entry, 31298, based on the mug shot of a female inmate from San Quentin, considers how the "correctional facility has a degenerating effect upon the inmate." Lundy deftly connects form and content as her painting about a broken inmate is broken itself, with blots of paint distorting the inmate's face and numerical identity. In addition to pushing the range of the theme's meanings, the exhibition featured a range of media, from paintings to encaustic (wax), digital media, and sculpture. 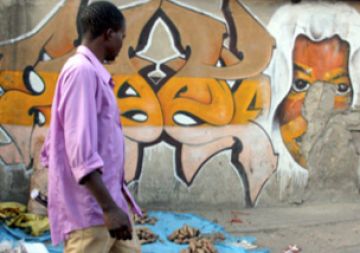 Streets of Hope: A Glimpse into Africa Photographs by Keven Seaver

Streets of Hope opens the viewer's eyes and heart to life inside two townships of South Africa, Soweto and Alexandra. The people struggle in overcrowded housing and land, lacking sanitation, water supply and electricity. They are, however, hopeful and resilient and tenacious. For more information on Friends of Alexandra visit www.friendsofalex.org.za.